On Saturday 16th & Sunday 17th of September, the Unibet Champions League of Darts rolled into town at our neighbours, The Motorpoint Arena in Cardiff. You may have noticed that here at the Smoke Haus we are pretty big sports fans, so we obviously wanted some of darts biggest names through our doors to taste test the best BBQ around and the boys did not let us down! 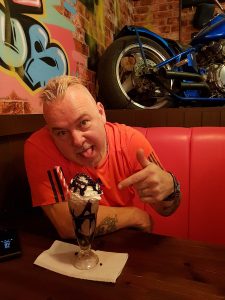 First in on Friday afternoon was Peter ‘Snakebite’ Wright getting stuck into some ribs & washing it down with one of our amazing milkshakes. Maybe a rename to ‘Shakebite Wright’ Peter….?

Next up on Friday night was a legend of the game and one of the nicest guys you will ever meet, Raymond Van Barneveld! Barney was kind enough to give us an amazing shout on Twitter and posed for pics with some of our staff & customers. An absolute gent & top bloke. We salute you, Barney! 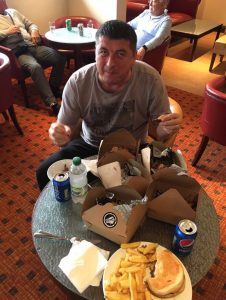 The eventual winner of the tournament Mensur Suljovic also grabbed a takeout from us on Friday night. Now, we don’t want to take credit for his outstanding performance over the weekend but we definitely think some BBQ restaurant fuel helped him on his way. Congratulations Mensur, you were a joy to watch all weekend!

Last but not least, a darts household name and 16-time world champion, Phil ‘The Power’ Taylor ordered a delivery from us on Saturday evening ahead of his game against Gary Anderson. What a pleasure to feed a sporting icon!

Finally, we would like to say a big thank you to our main man & PDC players marshall, Dean ‘Tabbage’ Williams for recommending us to the stars! A top bloke!

Here’s to the next one!